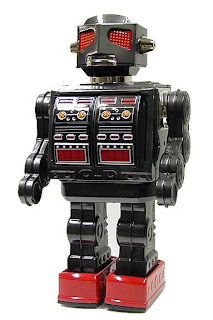 Joe Agate's veneer wood-paneled basement was nostalgia and technology in a high speed collision with wreakage of boxed action figures, antique tin novelty toys, flat screen monitors, vintage movie posters, and an entertainment center topped off with a larger-than-life flat screen. The nostalgic items had been collected since Joe was a child in the same basement his father collected since he was a young newlywed. Joe was given an allowance of collectibles by his father in order to safeguard his own grown man playthings. After Joe's father died, Joe spent most of his time in the basement away from his mother. After she died, he still favored the basement, the rest of the house remained hers.

Franklin picked up a box off the high shelf. The box read: Battery-Operated SUPER SPACE GIANT ROBOT. "Damn Joe, I used to have one of these. How old is this thing?" Franklin flipped the box in his hands and smiled at the illustration on the box; space, rockets, a cratered surface, and the SUPER SPACE GIANT ROBOT on the attack.

"Careful with it. If the box dents or it breaks it loses its value," Joe Agate said, visibly uncomfortable with visitors in his clubhouse.

"OK, OK, here give me that." Joe took the box from Franklin and opened it with the delicacy of a bomb technician. He pulled out the robot and the plastic mold, then removed the robot from the plastic mold. Joe got three D-cell batteries from a drawer, removed the battery panel, and inserted the batteries as if the toy could blow up at any second. "I've never opened this before. This alone reduces the value, but it's only worth about $300. So - what the hell."

"Three hundred bucks," Linus said. Linus and Wood had joined in a semi-circle with Franklin and Joe over the robot. Joe Agate turned the robot on.

The SUPER SPACE GIANT ROBOT's eyes blinked red lights and whizzed rocket sounds, then explosions. It made a straight-line mechanical walk on the tiled basement floor directly in front of Wood. Two doors on the robot's chest opened wide like cabinet doors and the red plastic lasers lit up with more whizzing noises and explosions.

"I think it likes you," Joe Agate said to Wood. Wood gave a fleering smile.

"My dad brought me this home. It wasn't Christmas, wasn't my birthday. He just brought it home and gave it to me," Franklin said, looking at the toy. "He had beat me like a runaway slave the week before. I mean punching me like a grown-ass man without me fighting back. I mean I coughed up blood and shit. Guess he felt bad about it and bought me this." Franklin was smiling on one side of his face. "My sister was jealous. Shit I wanted to get another beating to see if I'd get a new toy later."

"Did you ever?" Joe Agate said.

"Ever what?" Franklin said.

"Get another beating and toy?" Joe Agate said.

"Oh yeah, I got plenty of beatings. No more toys," Franklin said. "Shit I deserved the beatings. I didn't deserve no toys -- that's for sure."

"No offense, but I didn't know you grew up with both parents in the house. Wow, I didn't know that." Linus was genuinely surprised. Franklin just looked at Linus. His face said nothing, absolutely nothing.

Turning to Joe Agate, Franklin said, "You want to give us the security so we can get out of your hair?"

"I want this back, so you have to be extremely careful with it. It was my dad's. He was the original purchaser of it. He would kill me if I even looked at it." Joe Agate went to the corner of the basement and opened a low cabinet and keyed in a combination, blocked by the cabinet door and his wide body, and removed a small package from the safe that was bolted to the concrete foundation. Joe Agate walked back over to the men and handed Franklin the package. "That's $150,000 right there. Please be careful."

Franklin looked at what he held. It read: No. 16, July, All American Comics, 10 cents, Introducing THE GREEN LANTERN.

"I have something to carry it with," Joe said, and turned his back to go to a shelf for an aluminum briefcase tucked between a fruit crate full of vinyl records and a rectangle white cardboard comic box. Franklin took something metal from his pocket and set the comic on the table nearby and walked behind Joe Agate and wrapped the plastic coated metal cord around Joe Agate's neck and held tight.

Franklin's biceps bulged and Joe Agate's arms flailed trying to reach Franklin behind him. Franklin held his old friend tight for two minutes. Joe Agate's body fell off of Franklin's chest and to the floor hard, fat, and lifeless.

"Wood, pull the car to the back door. We'll wait 'till the sun goes down," Linus threw the car keys to Wood. Wood caught the keys and went upstairs for the car without argument.


Franklin shook his head disappointed looking at the blob that was Joe Agate on the basement tile. "The reason I brought the Kid..."

"Answering your question from earlier... What we need the Kid for?" Franklin said. "Help getting him up these stairs."