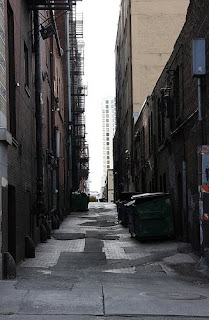 "There he is," Franklin said, looking as Joe Agate crossed the street after leaving the parlor.

"Is he going to be a problem?" Wood asked.

"A cheeseburger...maybe," Franklin said, with a sneer.

Franklin turned toward Wood, but not all the way. "Naw, Wood. He knows me and Linus here. We go a ways back. Waay back. It's kind of sad really." Franklin straighten in the seat. "Pull up beside him."

Linus started the Olds and pulled out into the old street. He turned the corner and drove slow next to Joe. Franklin pressed the button to roll down his window.

"Big Joe, big Joe. You looking svelte big baby. Let me holler at you..." Franklin said from the window with a smile. Joe Agate's eyes grew when he saw Franklin's caramel head leaning out of the Olds and turned to hobble down the long alley he was passing. The alley was bordered by old brick buildings. Franklin turned to look at Linus. "You kidding me right?" Linus smiled wide.

When Franklin opened the door, Linus slowed to a stop. Franklin got out of the Olds and skip hopped to catch up with Joe Agate with his hands out pleading and the same smile. Joe Agate stopped his fruitless jog and was breathing heavy.

"I'm going to get Brown his money," Joe said, and paused to suck in oxygen. "I'm good for it. I'm always good for it."

"Mr. Brown knows you're good for it Joe. Don't worry." Franklin was still smiling at his old friend. "Just lately...you haven't been good for it. No worries though Joe. He just wants to hold some inventory for good faith."

"Talking to the wrong man, Joe. Just doing my job here. Come on let's take a ride and be done with this." Franklin had touched him on the shoulder and they were walking back down the alley. Joe Agate pointed down the street when they got pass the brick alleyway.

"I parked down this way. You can just follow me," Joe said.

"Naw, ride with us. We'll bring you back to it when we're done."

"But I parked just right there." Joe was still pointing.

"Naw, ride with us. We'll bring you back." Franklin’s smile turned to a serious smirk that Joe didn't want to dispute.

The rear passenger door was open and Wood was standing behind it holding something shiny seen by Franklin through the darkened window. Franklin shook his head strong at Wood - same serious smirk. Wood put the silver shiny gun between his jeans and the small of his back underneath his shirt. Joe Agate never noticed.

"Let him in," Franklin said to Wood. Wood scooted behind Linus on the leather and Joe Agate got in. Franklin got in.

Linus stared at Franklin with a smile before pulling off. "'Svelte'?"

Franklin smiled getting comfortable in his seat and his friendly disposition again. "Good word, huh?" Franklin looked at Wood but was addressing Joe. "Everybody fit OK back there?"

"I'm OK Franklin," Joe said in a tired and defeated voice. Franklin pushed the lever to let his seat up a bit anyway. "All three of you guys for me?" Joe asked.

Joe Agate and Wood looked at one another.