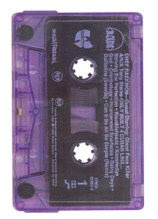 Quintin dug in his pocket and pulled out five dollar bills and seventy-five cents in change to add to the collection for Derrick to leave and buy the liquor. He told Derrick whatever that buys and whispered to Mike not to worry about it. Mike had asked Quintin earlier to spot him some money, but Quintin only had a little over five. What Quintin did have was a freshly rolled blunt that counted more than adequate to demand Mike be included in whatever's pouring.

The knock on the door was Nate. Quintin told Derrick to let him in when he went up. Derrick finally convinced Chris to ride with him and they both jumped up the stairs two at a time and opened the door for Nate who was banging progressively harder. Quintin could hear Derrick asking Nate for money at the door and Nate telling Derrick to get something besides that Christian Brother's shit.

Mike, Nate, and Quintin sat in the crowded basement - with low ceilings and a concrete slab floor with boxes on milk crates and plastic tubs full of Christmas ornaments and old romance novels and useless documents - and the conversation was top three lyricists. Quintin was definite of his answer: 1. Rakim; 2. Nas; and 3. CL Smooth. Mike was hesitant. He agreed with Quintin on Rakim and Nas, saying of course like it was a given, but disagreed with CL. He said he'd have to go with Ice Cube for diversity; neither Nate or Quintin agreed. Nate chose Rakim, Nas, and Raekwon.

Nate asked if they had gotten the "Only Built 4 Cuban Linx" album yet. Quintin said he had heard a few songs and Mike shook his head no. Nate pulled a purple cassette from a pocket in his cargo khaki pants, removed the tape in the boom box, and played The Purple Tape. The three were bopping their heads to "Criminology" when they heard the door up the stairs open and Derrick and Chris stumbling down the stairs with bags.

Chris sat the bags on the concrete. Cups. was a statement and a question as he pulled a gallon jug of Chardonnay from the plastic bag by the round handle big enough for only one finger. A quart of Christian Brothers brandy came from the other plastic bag and Derrick said it was all he could get with the money. Quintin went up the stairs and came back down with the four faded plastic fast-food collector's cups and one lime green plastic cup and sat them on the concrete. He pulled the blunt out from somewhere and told the rest of them look at what Mike brought. Derrick patted Mike on the back saying hell yeah and Mike looked at Quintin smiling while Quintin winked back.

Inpectah Deck was finishing his verse on "Guillotine (Swordz)", while Chris was passing the blunt to Derrick and Chris said in a coughing, slow exhaling voice guess who he saw at the store. Stacey Johnson. Chris said she was looking thick as fuck and that Derrick saw her too. Derrick nodded his head yes in agreement that he saw her and she looked thick as fuck in a good way while smoke was lifting from his open mouth into his nostrils. Quintin sipped the Christian Brothers from the lime green cup and bopped to the music and nodded at the same time. Chris asked Quintin if it was OK to put in his bid because Quintin and Stacey had talked earlier the same year. Mike immediately told Chris to leave it alone, but Quintin held his hand up to Mike pinching the blunt in the other and told Chris yeah, shit, go for it.

The weed lasted through the end of Cappadona's verse on "Ice Cream" and the liquor through two more playings; Nate fast forwarded to the best songs: "Incarcerated Scarfaces", "Glaciers of Ice", and "Heaven or Hell". Buzzed and high, Quintin declined the invitation to go to Crestfield Mall with the rest of them. Mike tried to persuade Quintin to come, but Quintin's mind was made. Mike was impressed by Quintin's restraint. The rest of the boys walked down the drive to Derrick's Renault Alliance, Chris yelled out shotgun, they all shut the doors, and Derrick sped off.

Quintin went back inside the house, the high was wearing off and the low of the alcohol was settling in. He shut off the lights in the basement, turned off the music, and went up to his room to lay on the bed. His mind went to Stacey Johnson. He imagined her coming out of Ame's Food and Liquor wearing tight dark blue jeans and a fitted white t-shirt. He imagined her lips shiny with watermelon lip gloss and clean white K-Swiss tennis shoes. He was aroused and masturbated to the image and his memories.

- Quintin was graduating from State University. He and Stacey had gotten back together for the last year of high school and attended the same college. They broke up the second semester and she dropped out the second year.

- Chris had died tragically in a motorcycle accident.

- Derrick was heavily involved in his family's church. He had become a deacon, on his way to a pastoral calling.

- Nate and Mike were still in the neighborhood, doing off-and-on jobs. Mike and Quintin were still good friends.
Posted by E's at Monday, July 27, 2009