The Beginnings of Lil' Knuc-Knuc... 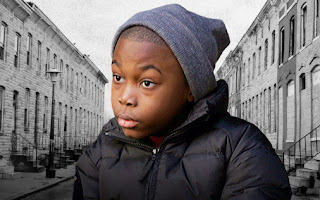 There was a velvet painting on the wall of a nude black woman posing on her side. Her hands were flat on what would be the ground and her afro was perfect; separated from the black velvet by the thinnest of outlines. She was intended to be laying, but she could be floating depending on the way you looked at it. There was a oak bookshelf filled with video cassette tapes; some slotted like books, others stacked five or six laid flat. There was a magazine holder, two clunky end tables, and of course the Zenith big-screen projection television.

On the picture of the woman, her breast were pointed and her areolas were wide, her expression was serious, and she wore only a thick gold herringbone choker and a gold bracelet. Her hair down below was a V-shape, and there was a fight scene on the television.

A gold metal ashtray was on one of the end tables. It was tarnished with ash. There were little seeds in the base of the tray. They reminded Delvon of the ball bearings on the bike that was broken in his yard; or really tiny smooth walnuts. He picked out the two frayed roaches that were mixed with the seeds and pocketed them. He knew what they were.

He picked up a tape from a stack of six on the bookshelf. The cassette was black with a gold label sticker with black writing. It read: "Blackmania Vol: #11". He thought of putting the tape down into his pants, in his underwear, and hold it pressed against his belly between his belt. But he couldn't think of anyone who owned a VCR, so he took a Players Pictorial Magazine from the magazine rack instead. He put it in his underwear, pressed against his belly with his belt.

When he heard the door opening in the hall, he knew he didn't have enough time to make it back to the couch. The hallway wasn't really a hallway, just a way to get to the two other rooms. If they were coming out, it would only take two or three steps to see he had moved from the couch. He put the cassette tape back on the stack of five and stepped in front of the TV. Chuck Norris was round-house kicking a man and back-fist punching another. His mother walked in first.

"Little Boy! Did I not tell you to stay yo ass on that couch?" his mother said. She was loud and upset, and was pulling at her blouse and skirt, all while pointing at the sofa. His mother was tall and dark and her afro was near perfect.

"Loretta," the man behind her said. "The little nigga just watching the TV, girl." He stepped around Delvon's mother. His voice was deep and rumbled. He was almost the size of the entryway - shirtless - with a green towel around his waist. "He ain't doing nothing." The man squatted down to the size of Delvon and looked at the boy face to face. "You like to fight, little man?"

Delvon didn't move; he just felt the corner of the magazine digging into his belly. The man's eyes were black. A degree darker than him, and the whites were yellow.

"I'm going to teach this nigga something he ain't ever goin' forget." the man said, and grabbed Delvon's hands and curled his fingers into his palms and put Delvon's thumb on top of his pointing and middle finger. He told him the punch launched from his feet, gathered power at his waist - and grabbed Delvon's waist and twisted it - and if landed squarely on a chin or nose, it would knock any nigga out.