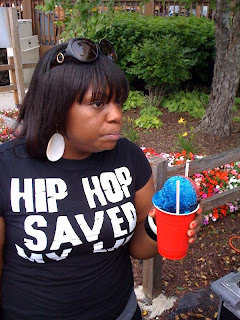 New help for the over 30 women who are at the point of "by all means necessary!", "I need a MAN!", press the "emergency button!" - REAL HIP HOP SETS. I was recently at the "Rock The Bells" concert, which represents REAL HIP HOP centerstage, and I was having a difficult time finding my concert girlfriend. You know that person to laugh and joke with, jump up and down with, and see who knows the most words to the song. And I've had this problem at other hip-hop shows: Mobb Deep, Wu-tang, and just underground hip-hop clubs in general. There's always ten dudes wearing goofy hats (like me) to every one girl wearing a turban head wrap. (By the way men, it's the exact opposite at a Erykah Badu concert!)

So if you want to get your "hollar" on and leave with at least 5-7 great prospects (real hip hop lovers are usually intelligent, educated, and gentlemen), look for REAL HIP HOP functions. This is my last over 30 post. LOL. I'm stopping short of getting death threats, beat up, or messing up my over 30 action...(I'm truly a fool.)
Posted by E's at Saturday, July 04, 2009