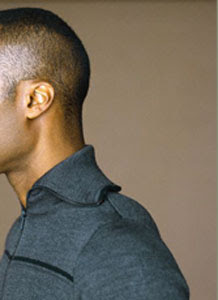 There is a book that's been on the New York Times bestseller list called Stuff White People Like: A Definitive Guide to the Unique Taste of Millions that's inspiring this post. I haven't read the book, just a snippet on Google Books though. I have it on hold at our wonderful Chicago Public Library. (Sidebar: I really love the library system. I can hold books from online. They are usually READY FOR PICKUP just as I finish the last page of my current book. Some folks love going to Borders, B & N, or their favorite local bookseller, I love the library. In these economic times I don't have to spend a bill to take the books home and I don't have to leave them promising myself I'm going to return to get it - you never do. Oh yeah, the eBay app on my iPhone is major for cheap books too.)

OK, so I'm looking at the snippet on Google Books and thought "What the Hell?" I'll steal his idea for a sec and run with it in a different direction. I leave the asterisks for the end...here's my take on Stuff Black Men Like:

1. Our Mamas: No matter if the woman who represents "Mama" is a grandma, aunt, surrogate, or even an older sister, DO NOT F WITH A BLACK MAN'S MAMA. That excludes kindhearted "Yo Mama" jokes, but aside from that, we generally don't play when it comes to Mama. You can take the most docile, tame, gentle, shy, and, for lack of a better word, "sissy" black man and test it. Pick an Emmanuel Lewis look-a-like, Steve Urkel-dressed, Wayne Brady-smiling black man with his Mama at the mall, bump the old bag, and say "Bitch, watch where you walking!" That unassuming, seemingly meek black man will turn into a mesh of 80's Tyson and Wolverine all over your ass. (Honestly, if you see any black man as described, DO NOT test this. This man is probably an axe murderer and YOU WILL DIE!)

ALSO, WOMEN BEWARE! Mama is and always will be the most important woman in his life. The thing is, the black man's heart is really, really BIG - so he loves you too. It's just that a lot of black men grew up with no designated protector figure in the house, so he fulfilled that role even if it was just in his mind. Even if Dad was there, he told him his Mama was most important ("Do what your Mama say"). In my opinion, a black Mama's love for a black son is the closest example to unconditional love on earth. Black son sells the TV - Mama loves him. Black son terrorizes the neighborhood - Mama loves him. Black son is caught wearing his sister's Rainbow Brite underwear - Mama loves him! Dad doesn't compare. So women don't try to compete with the black man's Mama. Give it up. Appreciate the fact that your black man has a BIG OL' heart that has room enough to love and care for so many.

2. Money in Pocket: Forget about a credit score over 700. Forget about degrees from various universities and titles at the back or front of his name. Forget about the Green, Gold, or even Black American Express card. Forget about it because most of us don't have all or any of those things anyway. As long as he can put together a fair number of Benjamins, Grants, Jacksons, Hamiltons, even Abes or Washingtons with a Benji on top - you've got a confident secure black man.

As long as he can hold a fat wad of cash in the deep pant pocket of his white linen walking suit, stepping in the cabaret on the leather soles of his Mauri gators, and tip his straw hat - the world and everything in it is his. It doesn't matter he still lives with grandma and parks his car in a friend's garage, those issues can wait in line. Cash on hand is KING! I'm showing my Detroit huh? Westside!

3. White Fear: There's a lot of disadvantages that come with being the most feared individual on earth. Annoying and irritating things like having to lighten up your voice at work so you don't scare the Hell out of the clients or coworkers. Or smile and laugh like you're the ten thousand and one black man named George (movie reference about black train porters). However, when an event happens that gives opportunity to capitalize on this unfair and unsolicited slot he's been designated, it's almost worth the disadvantages, and he relishes in every moment of white fear.

It's the moment he is cut off in traffic and follows the white man who did the cutting just for kicks. The moment his Mauri gators are accidentally stepped on in a crowd and the white man apologizes to an extreme. The moment he's walking to his car on a dark street and the white woman walking in front of him is almost paralyzed in fear. Those moments provide a brief satisfaction and he feels no remorse because he didn't create that fear, society did, so he doesn't apologize.

Tupac was right about one thing though. The black man's "I don't give a fuck" threshold is set at a lower tolerance than others. Bump his Mama and call her a "bitch", discount him in a display of public disrespect, or even take being "the boss" to a unprecedented extreme... His tolerance for saying, "I don't give a fuck about this job" is set a degree lower than others. Sometimes it's too bad, but it's just truth folks.

4. Asses: I try to be unashamedly REAL in these posts, just because - a person can choose to read or not - this isn't a solicited setting. Black men generally are ass men before they are titty men. So all the women considering artificial enhancement, think ass implants before breast, that is, if you're into black men. Black men love the ass (in general, I've heard of exceptions; however, when put to the test even those dudes I've heard say, "Look at that ass!!")

We were trained by our fathers and grandfathers, for that matter, to acknowledge a fat/phat ass with a gawking look back when passing an esteemed ass in any setting (just try to be inconspicuous at church and work, but still acknowledge). Now some black men have destroyed the game because they've held no standards and they have esteemed all fat/phat, discombobulated, dimpled, stretch-marked asses with no restraint. However, I'm here to set the record straight: There should be a slightly disproportionate waist-to-ass ratio! The waist (belly area) should NOT be the same or larger than the ass measurement. I repeat, the waist should be smaller, hopefully considerably, than the ass measurement. (I am a damn fool!)

5. Chicken: This is just a fact of life. The chicken must die, so the black man can continue to live. We can't all dance, watermelon is not necessary, unfortunately we aren't all...well I won't go there (I'm good though - trust ladies), but there's is one constant in the stereotypes...We love some chicken. Fried chicken, baked chicken, chicken'n noodles, jerk chicken, General Tso chicken, rotisserie chicken, even chicken tofu. Black men like chicken, quit playing...


Ok, I'm not going to write a full book here. This is just a few things I thought of, just messing around. Feel free to add or dispute, it's just my opinion. I didn't even get to the unconventional, untypical, unlikely things that black men like, like sushi, reading, community, martial arts, Westerns, menthols, country music, mani/pedi's, integrity, History Channel, original slang, and cognac or so on and so forth... I was going to do a bulleting of "Stuff Niggas Like" but decided not go negative... Oh, what the Hell...