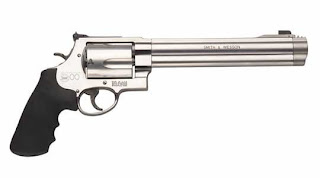 "You see the fucking size of that gun?" Det. Harris said. "Where'd he get it?"

"He says he got it from his grandmother's bottom drawer. Says he saw where she put it after she used it to scare his uncle out the house once," Det. Markson said.

"He's how old?" Harris said, sitting at a desk massaging the stubble on the top of his bald head. "Nine years old?"

"Nine and a half, is what he told me." Markson said, with a smile. Markson was standing.

"She's here. With him. She has legal custody, so she has to be with him. You gotta see this old lady, frail as a bag of bones. Fucking Death eating a cracker, man. Her ID says sixty-seven, but she doesn't look a year under ninety. The kid's just scared to shit."

Harris played with a bump that was just above his ear. "Umph... Funny, I was imagining that lady in the play. You know, the guy who plays the grandma."

"Naw man, just the fucking opposite. She's fucking Rosa Parks with a .50-Cal Magnum man. It would have to be like shooting a fucking newborn baby to her..."

"Yeah. Dead fucking center too. Splattered the fucker's head all over the kitchen. The stove. The cabinets. The refrigerator. All covered," Markson said, shaking his head. "It's these fucking video games. I was playing with my kid and he's like, 'Shoot for the head, shoot for the head'. This kid's a decent-sized nine-year-old though."

"Headless uncle, yeah. The wallet was in his jeans. The uncle's got a sheet too - drugs, petty theft..."

"Naw man, just a bullshit 20-dollar rock a year ago. But he did time on the theft charge about ten years back though," Markson said. "My guess is abuse, but who the fuck knows? Could be he ate the last fucking piece of chicken, the arrogance of kids now'days."
Posted by E's at Friday, June 19, 2009