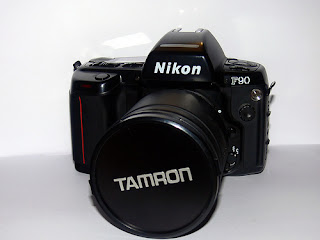 My father left me his camera. It was in a boxy aluminum case with two latches in the front that locked. It also had latches on the side that didn't lock. To unlock it, you'd have to get your fingernail into the little notches of the combination wheel, and flick them to 7, then to 7, and one more 7. And get your finger under the levers and pull. Then the latches would loosen and you could open it. The side levers, just get your finger under those -- no combination.

The camera was a Nikon F90. Pretty nice camera. It was separated in the case by a deep gray foam. The body. The flash. Two lenses. One was longer than the other.

I thought about what I wanted to shoot.

The camera had a wide strap that fit comfortable around my neck. I liked the way it wore. I looked authoritative with the strap around by neck and the camera hanging. I looked at myself for a good while in the bathroom mirror. I stood outside the door for a fuller view. It wore well.

I had an idea. I thought what if I did a series? I thought a good idea would be to shoot everything lying down. There was a guy I saw on TV, he shot everyone naked. Groups and crowds of people naked. He also shot people alone or as a couple. These were just average people. Pot bellies and stretch marks. Naked. Crazy shit. If he'd asked me to do it, I probably would've said "no" then. "No" to being naked for a photo.

I put the camera away, and it stayed there in the case for a long time.
After a long time, I flicked 7-7-7 and opened the case and put the wide strap around my neck and left my apartment. I went downtown. I took pictures of the buildings and the bridge and the water. I got hungry and bored, so I rode the train south back home.

On the train, three boys entered the car from the emergency door while the car was moving. They stopped in the middle of the car and asked for everyone's attention. Only a few people looked up. Then they started singing. I didn't know the song, probably their own, but it was good. Better than everyone expected. A woman took her earbuds out of her ears. A man dog-eared his book. The lady took a five dollar bill from her purse and handed it over to one of them. The man gave them a dollar. I dug in my pocket, but had no money, just my credit cards. I stood up and asked if I could take their picture. They looked at each other and got into a pose. One folded his arms and another reached out and pointed at the camera and the other just looked cool. I took a couple of photos, while I balanced myself on the moving train, and told them thanks and they went through the other emergency door.

I rode the train past my exit on Roosevelt. I got off at the 79th stop. I started taking more pictures. A storefront church next door to a liquor store from across the street. People walking by and cars passing through my picture. A Jamaican restaurant. I thought the colors were original. I walked farther. The sun was slowly descending, in a few hours it would be gone.

I walked down a street. Children weren't playing, just standing around. People on porches, sitting and talking. I took more pictures. I asked to take pictures of the kids. Some posed and laughed. I took pictures of the houses and the street.

One of the kids walked over to me and said I better stop taking so many pictures. He said it as if he was trying to warn me in a friendly way. I looked down the street, at the kids standing, the people on the porch sitting. I took a picture of them sitting with my father's camera. One of the men got up from the stoop and walked in my direction. He wasn't smiling for my picture. He said, "What the fuck are you taking pictures of, dawg?"
Posted by E's at Sunday, May 10, 2009