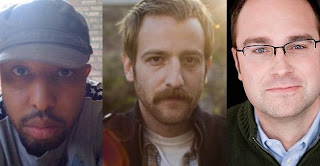 A chance meeting between two cool guys at The Moth GrandSLAM. Add one other cool musician/songwriter. You get a really cool event!

Below is some of the first press for a show we are doing in Chicago this March - 3 Guys, 4 Stories, 5 Songs.

Sad Brad Smith is a Chicago singer/songwriter whose music has appeared on the motion picture Up in the Air. His new album Love is Not What You Need is available now.

Matt Miller is a stage director and acting teacher who has directed productions all around Chicago, including the highly acclaimed Graceland - a Tribune & Sun Top Ten of 09.

And me, Shannon Cason, a nobody...