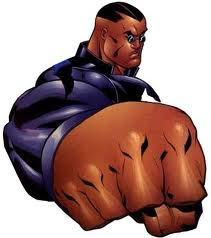 The two only African American superheros on THE R MEN (R for RESCUE), Master Blaster and Father Time, were at the Freedom Dome in the Mechanical Room.

“The crazy thing about these muthafuckers is that they usually come back stronger,” Master Blaster said. He was trying to push down the safety on one of his non-removable cannons. “That other dimension is like the prisons here. All the time they’re there the only things to do is lift weights, practice evil shit, and learn from more evil muthafuckers.”

“Yeah, but that’s for the next team to deal with...them bitches will be there for awhile,” Father Time said.

Master Blaster was looking around the utility table for something to wedge in the safety switch to turn it on. It was a small lever that had been broken down to a nub when he was dragged in the fight. “I can’t get this bullshit ON,” Master Blaster said frustrated.

“What you trying to do?”

“Turn this safety to ON on this cannon. Why the fuck I got this thing permanently attached is beyond me. I thought it looked bad ass at the time but I was fucking high as fuck...shit.”

“Hey you see the new bitch with The Good Guards. When they showed up and I saw that bitch, I was like Daaayum!” Father Time said.

“Oh, you talking about the bitch with the metallic blue tight shit on?”

“You could see camel toe in that shit! And her fucking powers, man!”

“This bitch started blowing shit!” Father time said, “To open her mouth that wide and start blowing fucking cars and muthafuckers outta the air...I got a hard-on when I saw that shit, man!”

Master Blaster was cracking up.

Father Time floated up to the top of the room and leaned back and was lying on his back like floating in water.

“Fucked up what happened to Goo-Man,” Master Blaster said. He had found a small metal drill bit that fit in the notch and was trying to leverage it gently to ON, as not to break the nub off farther.

“Yeah, but honestly...between me and you, right?” Father Time was floating closer to Master Blaster. “I never really liked that muthafucker that much though.”

“Yeah, but he caught a bad one though...Tried to do too much in this fight, slipped on that shit, and cost him his life. But I hear what you saying...he wasn’t at the top of my list either.”

“I remember once, when I just started with the team and shit,” Father Time said while floating back up toward the ceiling. “We were headed to the African jungles to save these beast people. Long ass trip right? Because Silver Man couldn’t just teleport us there, because he was on some other planet or some shit. But anyways, long ass trip. And I had to sit next to this gooey muthafucker. So he keeps dripping all over my cape and all over the seats and shit. So I just ask if he has a way to put a plug on that shit or maybe get some towels or a containment suit until we get to the motherfucking place and you know what this muthafucker says? ‘Deal with it.’ All deep-throated and shit. ‘Deal with it’

“Then we get there...and these beast people ain’t really people, more like mutated apes and monkeys. The beast people stupid as shit. Fucking animals. We trying to help the muthafuckers find new habitat so they can live and the muthafuckers start fighting us. We trying to help the assholes. So the Goo-Man wants to get on some racist shit like ‘Can’t you talk to them?’ Like I speak monkey or some shit. Fuck Goo-Man and that stinky ass gooey shit...good riddings. Dumb ass.”

“Yeah, that shit did stink. But he was on the team, but I hear what you saying...maybe woulda lived if he had a containment suit...focus his goo and shit.” Master Blaster finally got the lever to ON. “Yes! I think I got this shit ON. I’ll take it apart to fix it later, but I just ain’t feel like fucking with it right now. Gotta take my whole arm apart to fix the shit. Fuck that, I gotta get some rest...”

Super Guy interrupted over the PA: “All R MEN report to the Hall of Truth for debriefing.”

Father Time said, “What this muthafucker want? His long-winded ass would want a meeting. Shit! Honestly Blaster, I don’t think I can do this team shit too much longer. The pay is good, but shit I can make it on the outside.”

Master Blaster said, “I hear some guys went to China and do pretty good. Or do special ops for the government? But I don’t have no special powers, I just blast shit. You could though...you definitely could. They like all that mystical hocus pocus shit. Comeon let’s see what this muthafucker is talking about...probably about Goo-Man."

Master Blaster got up from the bench in front of the utility table and walked for the door.

Father Time said, “I’ll be there in a little while...” He was beginning to float through the wall by a door that said Rest Rooms. “I gotta take a shit...” Then he was gone.
Posted by E's at Wednesday, December 29, 2010