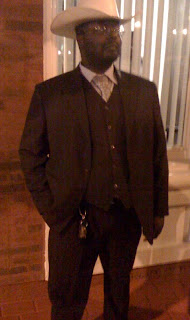 ...before Sheriff Hawthorne Tillman 'came law in Cook County it was basically a free-for-all. A man survived by watching his back, staying quick on the draw, and keeping his enemies in the sight of his six-shooter. Women and kids were damn near prisoners in their own homes.

The first thing he did was kick the shit outta all the riff-raff. Had em leave and hung his boots on the welcome post as a reminder not to return. He told them that was left, the town had new rules. He wrote em on a 5x3 board, leaned against the wall on the porch of Arnie's Brothel so it was sure to be seen. It read:

1. NO smacking round the wenches.
2. ALL firearms must be turned in to Sheriff's Office. Gave back when you leave.
3. NO public drunkenness.
4. NO wall drawing.
5. NO pissing in the troughs.
6. If you caught stealing, Sheriff puts back on his boots.
7. ALL civil problems settled man-to-man in the courtyard.
Posted by E's at Monday, November 16, 2009