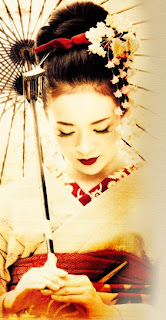 She said it real slow for him to understand. "Nigga's don't read. They watch movies or listen to rap music for their stories. When's the last time you saw a nigga with a book on the El? Maybe a Source magazine or something, but guess what?" She paused like she really wanted them to guess. "That nigga wasn't reading...he was looking at the motherfucking pictures!" Everyone laughed. He even smiled.

He picked up his book bag and touched her on the shoulder as he was leaving. "Bye, Ma." The screen door rattled shut.

He heard her still talking in the background. "That nigga better start rapping." Everyone laughed again. He smiled again.

On the train he opened the front pocket of his book bag and pulled out a library book. The book was The Gospel According to the Son by Norman Mailer. It was about Jesus' life in first person, as if told by him, from birth to ascension. The book started well enough, but the writer used more description than he preferred. He could hear the writer's intelligence and pomp in the paragraphs and smart sentences. He read on. He had checked out modern literature considered great from the library: Hemingway, Fitzgerald, Roth, Morrison, and Rand. He looked up from the book and around the train car. He turned the page and smiled.

Off his stop, he was uncertain where he was going. Writing at the library was convenient because there was no shortage of inspiration. He could walk the aisles, thumb the pages of some book until something took him. But boring. Silent as darkness. Homeless asleep on tables with open books. No eye candy, except the one young girl who stocks the books. She always dresses nice. Then the coffee shop. Students, lunch goers, and traveling salesman. Silent as a cacophony of voices. A three-dollar-coffee and a five-dollar-peanut-butter-and-jelly sandwich and he'd be close to broke.


He stood just pass the stairs leading up to the train for approximately three minutes. Concrete buildings loomed like tombstones. And he felt that small. Unnoticed and unaware, except for the passing of an occasional lady in black tights or charcoal fitted business skirt. He imagined her lifting the skirt as far as it would lift, until she had to unzip the side zipper to hike it up farther. Then bending her over on the hood of the Toyota Camry parked on the street just beside him. He started walking in the direction of the coffee shop.
The Asian girl in front of him in line looked back over her shoulder when the door opened and someone new walked in, noticed him behind her and smiled. "You can go ahead of me. I'm not sure what I want."

He picked up the book bag that was leaned against his leg by the handle and stepped to the counter. "Chai tea latte. Medium."

"You like those?" He looked back into her smile, while the Asian girl was still looking up at the chalk board menu. Her skin was porcelain with freckles, like imperfections on an antique geisha doll. Her long black hair was pulled back with a tie and her lips were slender, one shade darker than her complexion.

She lowered her gaze to his and looked at him thoughtfully, gesturing "yes" with her head as if he had sold her on it. "I think that's what I'll have too."

He sat at the wood table rereading the same paragraph. He looked up to see who was coming in the door and caught the Asian girl's eyes. They looked at each other casually, but the stare lasted a few seconds too long for insignificance. She curled her lips in a slight smile and looked away. He stared a second longer. In one second he imagined her lips, her tongue, and her breathing heavy in his ear.

Twenty-four minutes passed and only three pages flipped. He looked up and saw the Asian girl gathering her things. She took a thin sweater off the back of her chair and shook it lightly and slipped into it. She picked up an empty coffee cup and walked to the trash, which was right across from him. He watched her all the while, from when she shook her sweater until she walked out the door. She never looked in his direction, never said bye, or never thanked him for the suggestion. She looked professional and aloof.

He stayed two minutes longer and closed his book, never to open it again ever, and rode the train home.

He walked up the walkway. Everybody was still in the front room. His Aunt had a forty-ounce bottle between her legs, still in the brown paper bag. The table had Jet Magazines, a gold Good News Bible, and a Richard's Wild Irish Rose bottle laid flat. They were laughing about something.

"Here my little anomaly, my ig-nigga..." she said when he got all the way in the door. He stood looking at the four adults around the room. The only other man was sitting with a dazed smile. Maybe happy someone else was present to carry the burden of comedic abuse or maybe what he had just drank.

"Yeah that. You ain't the only one who know big words," she said. He could hear alcohol. "Where you think you got your smarts from? Me. You know you ain't get it from your dustbag of uh dad."

"What are you talking about?" he said, with a lighthearted laugh.

"You're my ig-nigga...e-nig-ma...a nigga with a library card." Her audience laughed. He smiled again and picked up his mother's empty bottle off the table and threw it in the trash in the kitchen.
Posted by E's at Monday, May 11, 2009