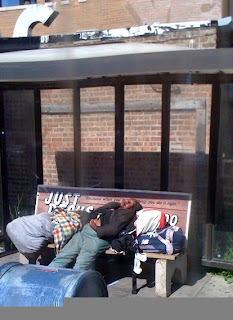 Claudette once tapped a young girl woke with her foot. The girl riled up annoyed. Claudette said, "It's best to nod when the sun's up, when it's down a lot of shit happens you wanna see coming."

Another time she told the girl, "Don't be on that Southside too much. Dem white muhfuckas Up-North don't fuck wit you like them black muhfuckas, they just look... You gone get your ass in trouble following that rock."

A while later, Claudette asked Johnny if he had seen that young girl anywhere around. Johnny said he hadn't. He said, "You know these young ones don't last." He was eyeing the Grand Lux doggy bag. "Lemme get that last bite."
Posted by E's at Friday, July 02, 2010